In 1979, Patrick McGoohan granted a rare interview discussing The Prisoner to Roger Goodman, a co-founder of the first appreciation society for The Prisoner television show and publisher of my book, On The Trail Of The Prisoner: A Walking Guide To Portmeirion's Prisoner Sites.

That McGoohan interview is available on CD at www.priz.biz, in Portmeirion and on its shop website.

The behind the scenes lead-up to Roger Goodman's 1979 interview with Patrick McGoohan in Ireland, where they talked about his career and The Prisoner, which was filmed in Portmeirion is something that will be of interest to fams of the show and the place. With Roger's permission, I present in his own words, what occurred before he pressed the Record button. (See below.) 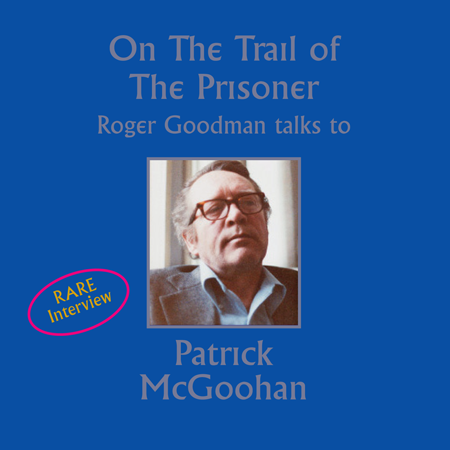 It was 9.15 pm Wednesday 4th April 1979 when I enquired of the receptionist at the Royal Hibernian Hotel in the heart of the city of Dublin whether Mr and Mrs McGoohan were 'in'. There was no reply from their room, No. 3A, but the porter suggested that I try the hotel's restaurant next door, La Rotisserie, or, failing that, the bar 'The Duke' just around the corner.

The head waiter at La Rotisserie greeted me with a smile, but I could already see over his shoulder at the first alcove a beautiful woman whom I felt had to be Mrs Joan McGoohan. The waiter confirmed my suspicion and at once I was face to face with the Prisoner himself, Patrick McGoohan.

'Is it Roger?' he asked mildly yet earnestly, rising from his seat and shaking hands.

Immediately the media image of a craggy, sharp-spoken loner dissolved, for here was a man who was welcoming, enquiring, endearing, with whom I felt at ease, as though he were an old friend or a long lost travelling companion - after all we have both spent a lot of time on THE PRISONER. His wife too was serene, smiling, intrigued and intriguing.

Although they had just finished their meal and were about to leave, Patrick called for the waiter to lay a third place for me and recommended the Dover sole - he liked the special way it was grilled here. I accepted his advice and he ordered the sole and a gin and tonic for himself. He lit a Dunhill cigarette.

The conversation centred around THE PRISONER. What do we do next? A second series? A one-off special? 'Start with No. 1 and work backwards?' suggested Patrick mischievously. I reminded him of the people I had talked to over the past two years who were still prepared to work with him again even after thirteen years. He was humourously dismissive of George Markstein ('George who?'), Kenneth Griffith ('He owes me some money'), and Frank Maher ('Fearless Frank') - these were all said smilingly. And he remembered warmly and admiringly David Tomblin ('brilliant'), Bernard Williams ('reliable'), and Leo McKern, recalling his nervous breakdown during the filming and his courageous return to the set after treatment. He was obviously a man who had a great capacity for affection for those who appealed to him.

I finished the sole. Patrick signed the check, and we adjourned to The Duke, an unostentatious Dublin bar in the adjoining street where he seemed to feel at home. He had no fondness for night spots frequented by fellow professionals, but preferred to keep close company with friends in intimate surroundings.

Patrick insisted on buying the first round, a local Irish whisky for himself, a sherry for his wife, and the conversation ranged further afield.

'Do you ever yearn for the stage?' I asked.

'Conceptual art is crap', he declared, adding, 'Now "crap" is a big word'.

Although The Hard Way, the film for which he was in Ireland, was reaching the end of its location shooting, the recent snow had meant the hectic reshooting of some outdoor scenes to preserve continuity. If he'd had a hard day, it scarcely showed and he seemed disinclined to retire for the night to get some rest. Patrick told me he sleeps very little, and the conversation leant towards more domestic matters. He described their home in Pacific Palisades - "a kind of American Mill Hill" - and how there was a new addition to the family in the form of his grand-daughter Sarah. 'Marriage is a wonderful thing', he avowed, 'It is more important to like the person you marry than it is to love them'. The apparent interview coup that the TV Times claimed for their American correspondent Leslie Salisbury, when she spoke to Joan and Patrick two years ago, turned out to have been conducted with Ms Salisbury in her Hollywood office and the McGoohans talking on their kitchen telephone.

'Patrick reminisced on the strong working relationship he had with Peter Falk, a great admirer of THE PRISONER. He recalled when they parted on one occasion and, as they shook hands, Patrick could feel something cold in his palm. He opened out his hand to find staring up at him one of Peter's spare glass eyes. "Be seeing you", grinned Falk. Patrick admitted that he had "tinkered a little" with the script of Identity Crisis, the Colombo episode which owed much to THE PRISONER and the two men's fondness for collaborative writing.

Rafferty, he told me, was a good idea initially - about a roving country doctor performing a series of unusual and interesting operations - but his confinement to the hospital and the lack of good scripts, coupled with hack directors and hack editors, meant an early demise to a series Patrick even offered to improve with an injection of his own money.

As regards television work again, he preferred the idea of a television "Play Of The Week", which in America now had good scripts and was shot more as a film but specifically for television transmission. He was considering the part of Flash Gordon's father in the film Flash Gordon, but was worried about the five months it would mean at Shepperton - "too long". He was unaware of being offered roles in Starsky & Hutch (as their English colleague in a forthcoming episode) and in Star Wars II (as Emperor of the Universe): "If I have been offered them, my agent hasn't told me".

Our talk moved onto more metaphysical subjects, Faith, Hope, and Charity. After any kind of setback Patrick was always cautious "until the next time": 'One must never give up trying'.

All the while his observant eyes and quicksilver tongue danced the knife-edge between stern severity and teasing irony. At one stage he had seemed justifiably to have had enough of my questions and in a torrent of interrogation began, 'Why do you wear that watch? And why are you wearing new shoes? Why do wear a beard? And why do you wear your hair like that? ...'

But I've noticed in other interviews that he's given that at some juncture there's a challenge or "testing point" to the interviewer and/or audience after which, depending on whether the interviewer has "passed" the test or not, the interview may or may not proceed meaningfully. I think that I must have passed.

As we walked back from 'The Duke' to the Hotel, I found myself walking with a giant of a man certainly, but light on his feet in the Dublin street, insensitive to whatever weather, as I discovered the following day when I met him again in town on his way back from the dentist, who drained a tooth abscess daily, still dressed in the same style of casual jacket, open-necked shirt and trousers, in the pouring rain, as he had worn the evening before.

When we parted at the first floor landing, I knew I would be unable to sleep. He promised to meet me over breakfast, providing the studios didn't give him an early call, and I went back to my room pondering on this man with poetry in his soul, a Romantic who confessed to being impressed with the service of organisation as the foundation upon which creation can be structured, a perfectionist who recognised his limits, a man who gained artistic freedom by abandoning the business side of things to professionals he could trust.

After breakfast the following day we spoke more about the origins of THE PRISONER and recorded some of our conversation.

What came next is found on Roger Goodman's audio interview with Patrick McGoohan. 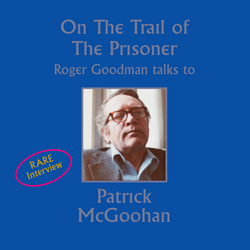