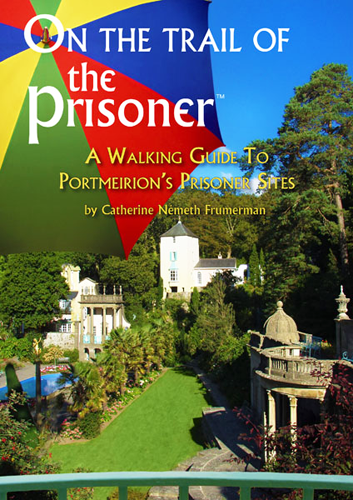 Color! Eye-popping color! That was my first reaction to "On The Trail Of The Prisoner: A Walking Guide to Portmeirion's Prisoner Sites." A friend of mine was even more surprised. His memories of the beloved British television series were from a child's eye view of his family's 1960s era black and white television. He was amazed to learn that The Prisoner was held in such colorful surroundings and that his prison was a very real place in Wales.

Most North Wales travel guides describe Portmeirion first as "a colorful Italianate village," and second, as "the place where The Prisoner was filmed." No doubt many visitors are attracted to Portmeirion because of its Prisoner connection. So, I was taken aback to learn that this guidebook is the first publication specifically dedicated to Prisoner-related sites.

Catherine Nemeth Frumerman is not just a travel writer; she is a die-hard Prisoner fan. Not only does she know her way along Portmeirion's winding paths, but she also knows every episode of The Prisoner inside and out, backward and forward. She walks her readers through the Village, describing how each location was used in the television series and its importance within the Prisoner canon, You will not only learn how to get from place to place within the Portmeirion grounds but will understand the apparent relationships among the various locales as seen by television viewers. Also described are changes in the grounds and buildings during three decades since the filming, gleaned from conversations with the grandson of Sir Clough Williams-Ellis, managing director of Portmeirion, and the hotel staff.

Despite the wealth of information, this book is not tedious or pedantic. The guide is a compact 40 pages, handily carried on a stroll. Frumerman's writing style is economical and she spices her text with anecdotes told by local residents who were involved in the filming. Local scuba diver Brian Axworthy served as a stunt double for Patrick McGoohan's Number Six and as a Rover-wrangler. He explains how he managed Rover, "the great white beast," by "filling it up from compressed air bottles borrowed from the RAF" and tethering it underwater with concrete blocks and fishing net.

The author's vocabulary is not for the untutored. When was the last time you said "ailurophile" or "defenestration"? But like the rest of the guide, these words reflect the light and quirky spirit of Portmeirion and its surreal alter ego, the Village.

Even if you have no interest in The Prisoner, this book is worth buying for its beautiful design and the glorious color photography by Bruce Frumerman. The book is easy on the eyes, with plenty of white space. The photographs not only illustrate the text but also stand alone as art photography. The photo captions supply more delightful detail. Over and over we encounter refreshing splashes of Portmeirion green, that enigmatic aqua-turquoise shade, perfectly described by the Welsh word glas.

The guidebook is available at The Prisoner Shop in Portmeirion or from the PrizBiz website at www.priz.biz.

…At the other extreme is Cathy Frumerman's short and to the point examination of Portmeirion's Prisoner locations. A publication like this has long been overdue, and On The Trail Of The Prisoner is ideal for a leisurely stroll in the sun around Sir Clough Williams-Ellis' famous folly. Bar an eccentric turn of phrase here and there, the text is clearly written and informative and peppered with anecdotes from local people involved in the sixties filming. Neither anal nor alienating, this is ideal for both die-hard fans and people who have a casual interest in the series. As the author says herself, what this guide doesn't do 'is beat you to a pulp with trivia'.

The 40-page book is full colour throughout, containing impressive contemporary photographs of Portmeirion Prisoner landmarks by Bruce Frumerman, and some truly stunning, and as far as I know never-before -seen, stills from the location shooting in 1966. On The Trail Of The Prisoner is clearly a labour of love, and a salutary lesson in what can be achieved by talented individuals without the backing of a major publisher - and, more to the point, for a quarter of the cover price of The Village Files. Recommended.

With the proliferation of Prisoner books over the past two years, it's excusable for fans to find it hard to keep up with them all. Yet to miss the chance of buying this book would be a mistake indeed. "On The Trail of The Prisoner: A Walking Guide to Portmeirion's Prisoner Sites" is an essential purchase for the many Prisoner fans who visit Portmeirion, or are intending to visit.

It's a slim volume at only 40 pages, but more pages would only be padding. Besides, it's a guide book, intended to be read as one walks through the village, and a lightweight format such as this is perfect for its purpose. That said, the book doesn't skimp on detail, and Catherine's writing style conveys a lot of information with lucidity and a friendly manner. In lesser hands, such a book could be dry and tedious, but here the descriptions carry the reader along effortlessly from one location to the next.

Importantly, the book also explains which Village scenes were filmed in the studio, and even gives reasons why, such as the scene where Number Six pretends to woo Nadia in the episode "The Chimes of Big Ben" , where studio filming was used because a nighttime scene at Portmeirion wouldn't lend itself to such subtle lighting. The book also explains the discrepancies in the geography of the Village to that of Portmeirion, such as where Number Six often walks from one location to another, which would be impossible in the real village. It's such attention to detail that adds an extra bonus to the text.

One small drawback of the book is in the layout, where large areas of white space appear on some of the pages. Perhaps a light background image (a photograph in, say, a 10% blue) could have been used behind the main text and photographs to fill out the areas. Presumably the various areas of space occur because there is no formula picture size. However, the variety of the size of the photographs is a good idea, as a compromise to a standard grid format would spoil the books visual beauty. Its large full colour images have a sharp clarity, and are expertly photographed by Bruce Frumerman.

If the text and original photographs weren't worth the cover price alone (which they surely are) the book has something else to set Prisoner fans drooling. Several full page photographs taken during location filming of the series.

In all, "On the Trail of The Prisoner" is a worthy addition to the bookshelf of any aficionado of The Prisoner and/or Portmeirion, and, like the real village itself, is full of fascination.

Exclusively available from The Prisoner Shop, Portmeirion, or from the publisher at www.priz.biz.

There have been many guide books on Portmeirion down the years, the latest being the excellent full colour version published two years ago, but until now none specifically devoted to locations seen in "The Prisoner" TV series. The project is a long-time dream of Six of One co-founder Roger Goodman; the book is a similar size and is printed on similar glossy paper to the aforementioned Portmeirion guide book, and is intended to lead the reader who is only familiar with the Village from "The Prisoner" along a trail through the locations as seen in the series.

The cover shot is one familiar to visitors to the Prisoner shop; looking out over the Village from the balcony window, it is the view first seen by The Prisoner when he first looks out of the window of what he, up until that moment, thought was his own London flat. On the back cover is the view he would have had from his London home, taken at 1 Buckingham Place. This is the only London shot in the book.

On almost every page there are beautifully shot photographs (by Bruce Frumerman), starting with the Prisoner's house itself and from there taking in all the sites seen in the series accompanied by text informing the reader in which episode the location could be seen in. As well the pictures taken for this book, there are several full page colour photographs taken during actual filming of The Prisoner taken from Roger Goodman's own collection, presumably these pictures will not have been seen for many years. A real treat is on the inside front cover; there is a B&W shot of the star, Partick McGoohan, strolling through the Village, one hand in pocket, the other holding a cigarette! This picture is provided by Heulwen Vaughan-Hatcher, who featured as an 'extra' in the series and more recently staffed the Prisoner shop for the first year of its existence.

The text is clear and concise, and does not go overboard on trivia; although informative the intention is simply to point out in what relation to the series the location features. For more information on the Village itself, there is always the Portmeirion guide book of course. It's common knowledge that many 'Village' scenes were not shot at Portmeirion at all; rather they were studio mock-ups, and this book will help you distinguish between 'real' and 'fake' Portmeirion. If you have DVD, it is much easier to spot!

To conclude: a perfect companion for the Prisoner fan new to Portmeirion, and a book that will appeal generally for its excellent photographs of the Village. Highly recommended.

For world-wide mail order purchase of On The Trail Of The Prisoner and other Prisoner items, visit www.priz.biz

Read an excerpt from the book