Slate mines are pretty unassuming places: grim, antiquated holes-in-the-ground where men worked long, hard hours, rarely seeing the sun. Chwarel Hen, however, bucked its gloomy  Victorian upbringing by emerging as a Hollywood star ninety years after the last load of slate was brought out of its depths. Found just off the A496, a coast road replete with soaring views over Tremadog Bay, Chwarel Hen, Llanfair, is open to visitors. If you are coming from the north, Chwarel Hen is about a mile south of Harlech Castle, left and up the hill at the brown sign.

The site is immaculately maintained. There is a snack shop, a souvenir shop and a sweeping sea view toward the New World from the parking area. It is remarkable how many of the parking areas of North Wales burst out onto spectacular vistas. It is also worth noting that this is the sight that miners turned their backs on each morning and descended down Jacob’s Ladder for a day’s worth of cryptic darkness. 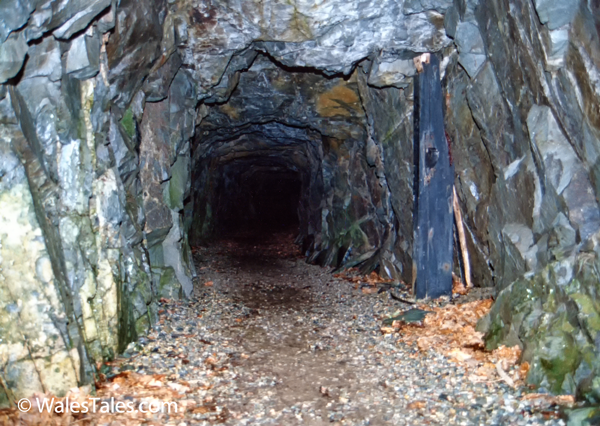 Behind its tall iron gate, more than half of the old quarry (for this is what Chwarel Hen means) is open to visitors. 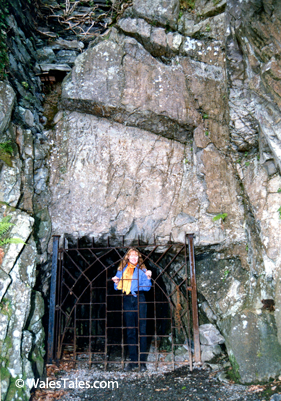 There are nine chambers to explore starting with the first and largest, the Cathedral Cavern, ethereally illuminated by the misty daylight seeping in through the large hole -- “the Window” overhead. This chamber contains a few mining remnants, such as the eight-foot long “jumper tool”, a metal javelin with which a miner drilled for four or five hours making a single hole in the rock face, preparing it for blasting. In Victorian times this needed to be done purely with muscle power. Well after its retirement, the mine served to house over 2,000 tons of TNT during WWII. 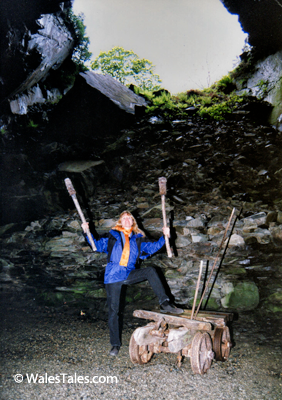 Still closer up the time scale, Chwarel Hen played the role of Mordred’s hideout in First Knight, a movie starring Sean Connery and Richard Gere. If you have seen First Knight you have already seen the large iron ring and the winch in the center of the Cathedral Cavern. In the movie, a campfire burned within this ring, and Guinevere was bound to the winch. When Chwarel Hen was a working mine, the ring was used as a turntable to turn slate carrying trucks around. The winch, with the sweat of four men, was used to pull the slate up from the lower levels. It is fun to see how a big Hollywood production, First Knight, was inspired to use as props some of the old tools that just happened to be there. “It’s all as it was in the movie,” the woman selling admission tickets at the souvenir shop promised, “except we don’t have the oubliette.” 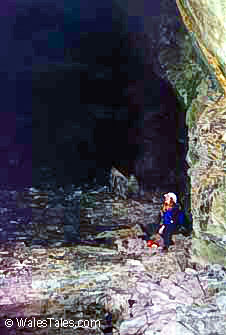 While there is no deep, dark dungeon, there is a drowned chamber. Moreover, there is a wall on which there appears to be a drawing of a giant human face, lying on its right ear. It is a survivor of the working mine, which was in business from 1873 until 1906. The face, painted by nature, wears a serene expression. The thick chains dangling down some of the mine’s walls, however, serve as reminders of the grim aspects of mining. The miners used these chains if they wanted to work high up on a rock face. A man would haul himself up and wrap the chain around his left thigh, balancing and maneuvering with his right leg. This must have been very painful. I grabbed hold of a chain myself and took a step up the wall. The sooty chain was cold, hard and indifferent to my fingers. It hurt to grasp it tightly. Yet this obdurate chain was the lifeline of a man working 70 feet up a rock face, as he labored by the light of his lone mutton fat “drip candle”. 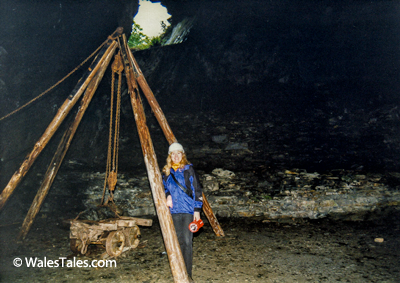 Could this miner, as he snuffed out his last underground candle, have had any inkling that visitors to Wales would someday want to look around in his dusky workplace, and that they would pay money to do so? As for movies, they had not even been invented yet.

Do not look for movie memorabilia at the souvenir shop. The clerks were not even allowed to take photos of the actors during First Knight’s filming. However, do consider a slate fan a fitting souvenir. The creation of this little object marked the end of an aspiring slate splitter’s six-year apprenticeship, here and at other slate mines. From a three-inch square block the apprentice would have to split 25 to 30 pieces-to-the-inch of thin slate fingers. These he would cut in a keyhole design. The finished blades were bolted at one end, and the design was fanned out. A few of these original slate fans are on display at the Chwarel Hen gift shop. Handmade replicas, weighing only about a pound and a half, are for sale.