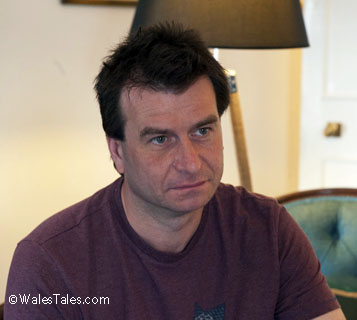 Rick Davy:  George Markstein has always been a name which in my opinion was "under mentioned", both in terms of The Prisoner and also his contribution to film and TV generally, he had become something of an enigmatic figure. Over the years I have met and chatted with many members of the cast, writers, and crew of the series, and many of them had talked about Markstein and his contribution to the series and I felt that it needed to be investigated just what he was, and wasn't, responsible for.

Wales Tales: Do you think The Prisoner would have become such an iconic work of television art if not for George Markstein's participation?

Rick Davy:  Definitely not to the same extent. Whilst the more surreal and intense elements of the series are definitely from the mind of Patrick McGoohan, sending the series into a unique direction, many of the spy-centric elements can only have come from Markstein's interest in spydom, which underpins so much of the narrative. He was also the man responsible for bringing on board almost all of the series' writers, and I think the series would have been much poorer without the work of people like Kelsey, Tilsley, and Skene.


Wales Tales: It's a pretty eye-opening book. I learned a lot, and I'm a long-time listener to discussions about The Prisoner. Also, it’s good to have so much information in one place. As far as I know, there has never been this much attention dedicated to George Markstein and his work in The Prisoner.  Do you think the more casual viewers of the TV show will enjoy this book? Maybe even find that they can again watch the series with fresh eyes?


Rick Davy:   I have always said that The Prisoner can be watched on several levels, the main ones being as a cracking spy adventure story (the way Markstein intended it) or an in-depth surreal allegory (the way McGoohan intended it). What the book does is not only educate those interested in the genesis of the series, and the story of the production of it, but also opens up the possibility of watching it from a new perspective, almost if you like through the eyes of Markstein, as a story of pure cold war spydom. I guarantee that after reading the book, folk will watch the series and discover things they hadn't thought about or noticed before.

George Markstein And The Prisoner is available at Portmeirion and from Amazon.