“No, I did not deliberately write myself in as the man behind the desk,” George said to Roger, in an exchange appearing in the new book George Markstein and the Prisoner, edited by Roger Goodman,  published by pandqmedia. “The idea that I should represent the evil monster of the establishment only came when the sequence was shot.” The sequence is the famous opening to The Prisoner featuring KAR120C, the footfalls in the corridor, the shattering of china teaware, and the evil monster himself, behind his desk, looking bemused.

Roger Goodman shared many dinners, as well as a long correspondence, with George Markstein, script/story editor for much of The Prisoner. Roger also interviewed George for the special Prisoner event at the ICA in London in 1980. Roger’s new book is a treasure trove of  information about the creation of The Prisoner from the Markstein approach gathered together for the first time ever.

Following is a brief Q & A with Roger Goodman, an addendum to the information in George Markstein and The Prisoner.

Wales Tales: There are some quotes by the subjects in your new book, Roger, where they contradict one another. For example, Lew Grade is quoted as saying, "Stars are important, but not as much as a good scriptwriter." and yet, George Markstein, who was a scriptwriter, said, "Nobody wants to know about scriptwriters. It's the actors who sell a series to the public." In the context of The Prisoner, who is more right? 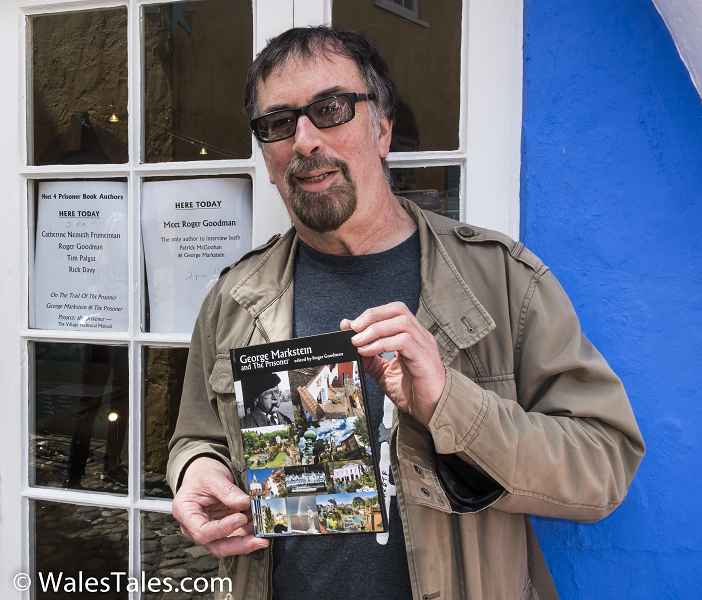 Roger Goodman: I think George is referring to the 'selling' of a series. The screen world was more naive in the 1960s and I'm sure people thought that the stars did everything. If you look at some on-line blogs even today, that impression does not seem to have changed with more modern understanding! "Patrick McGoohan's new TV series" would be far more reader-grabbing than "George Markstein's new TV series".  But Lew Grade was a 'story man' and that's why scriptwriters were paramount. When pitching new TV shows to American networks, he'd pace the room and act out their synopses rather than rely on big names to do the talking for him. No scriptwriters, no synopses.

Roger Goodman: The article in question is also referred to by Lew Grade in his autobiography:
I had lunch one day at CBS ... I told them I had a project called The Prisoner with Patrick McGoohan, and showed them a portfolio of pictures of the village of Portmeirion, which was the location we intended to use.

"At the moment though, Patrick McGoohan only wants to make 17 episodes," I said.

"How much do you want?" they asked.

I told them the terms and they said we had a deal.

Now, the only problem with that statement is that it is obviously back-fitting in that at the early negotiation stage 17 episodes would never have been an option, but it’s interesting that Grade describes the portfolio of pictures much as Markstein did, a collection of Portmeirion photographs taken from a colour supplement.

What’s even more interesting from the above is that Grade makes no reference to the fabled 40-page dossier that McGoohan is alleged to have worked up for the programme’s pitch. Had it actually existed, I’m sure Grade would have shown it to CBS at that lunch.

Wales Tales: Is there anything that you've come upon since the publication of George Markstein and The Prisoner that you wish you had included in the book?

Roger Goodman: I had considered exploring the concept of 'What’s in a name?' as an Afterword to the book.
We had read in previous sections of the book about the meticulousness of George Markstein in outlining his storylines to his script writers. Did this attention to detail extend as far as the characters names?

Wales Tales: For sure. It’s a writerly tradition.

Roger Goodman: This scrutiny with regard to The Prisoner is relatively easy, as most characters have numbers, and some have titles, like the Butler and the Professor; some have both, like the Supervisor. But those who actually have names, what of them?

Cobb, Dutton, Villiers, Thorpe, Stapleton, Danvers — all their names could have some derivation/connection with a 'settlement' of sorts.

On the Internet Surname Database, one finds the following about Villiers: “The name is locational and originates from the various places called Villier or Villiers in France, including for example, Villiers-le-Sec in Calvados, Normandy. The derivation is from the Roman (Latin) word 'villare' meaning an outlying farm or dependent settlement, and cognate with surname of Norse-Viking origins Thorp or Thorpe, or the Olde English Worth.”

So Thorpe and Villiers both effectively refer to a settlement or Village.

But less obliging with the above theory is Fotheringay, the character played by Richard Wattis in The Prisoner episode The Chimes of Big Ben. Wattis had already appeared in five episodes of the first series of Danger Man, as lasting, Drake's superior,  making him and his character the most reoccurring.
And at that point I stopped, as I felt I was probably reading something into nothing, well, nothing much perhaps.

Wales Tales: Perhaps to be continued.

George Markstein and The Prisoner is available internationally, but not yet by drone, from Amazon and instantly by a visit to the Prisoner Shop in Portmeirion.