Another Meditation on George Markstein

So, just who invented The Prisoner, and from where did the inspiration for the stories come? Both Patrick McGoohan and George Markstein have separately claimed the right to be the number one originator of the series. McGoohan was the star, forever the face of Number 6; while Markstein, screen-credited as script editor during much of the series, called himself story editor — a more hands-on, creative role.

While in the eyes of many viewers it’s clear that The Prisoner was Patrick McGoohan’s baby, the book George Markstein and The Prisoner, edited by Roger Goodman,  has — through the words of Markstein himself and the words of people who knew him — shed new light on Markstein’s  enormous contribution to the series.

Yet, the roots of inspiration may have travelled deeper than previously thought. World War Two’s history and subsequent fiction was a great source of material for Markstein as a creator of The Prisoner. Take this example:

A 1965 movie 36 Hours (available on DVD) is about an American army major who was collecting Nazi secrets from a contact in Lisbon. During one of his missions over, the Nazis drug and kidnap him whisking him away in a hearse and putting him to bed in a make-believe American hospital in Germany. The hospital is staffed by American-speaking Germans and an American-born Nazi army doctor (Rod Taylor). The entire charade is set up to derive the secrets from the major about an imminent Allied invasion.

Warning: Spoilers from here on.

We learn that there had been other uncooperative captives in this hospital, “mere foot soldiers”.  But by capturing Major Jeff Pike the Nazis know they have caught a big fish and begin to marinate him Schizoid Man-style. Rather than turn their captive left-handed, the Nazis use drugs to induce weakness and hyperopia, and confuse him by feeding him false information.

Earlier in the movie we saw Major Pike get a paper cut as he zips his hand down a map of the English Channel and surrounding land at Allied Headquarters in London. “Like a razor,” he says, putting his finger to his mouth. That midnight he is on a BOAC flight to Lisbon to meet his double-agent contact. Only the Nazis are on to him, slip a mickey into his coffee at a Lisbon cafe and the next thing you know he is unconscious in bed in the make-believe hospital where his keepers are intensely discussing dyeing his hair and otherwise changing his appearance. 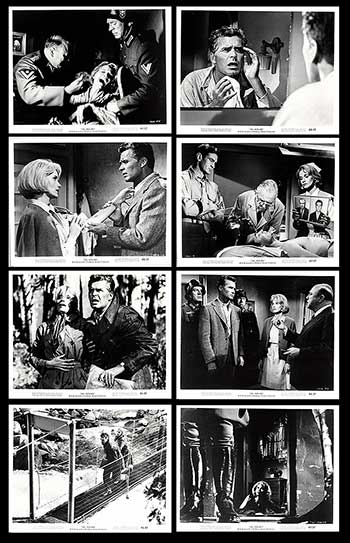 After Major Pike, played by James Garner, awakens he is relieved to find he’s in an American hospital. We see him peeking out the window as he catches his first glimpse of his new surroundings peopled with other hospital patients out on the lawn and with caretakers pushing an occasional wheelchair. You can almost overlap scenes from The Prisoner onto corresponding scenes from 36 Hours. You can almost hear the music.

The Nazis, of course, are eager for Major Pike to swallow their story quickly in order to extract the plans of the pending invasion from him. To convince him that it is now five years after his initial fall into amnesia the Nazis fan a large file of Major Pike’s progress reports over the years at him (think Number 6’s file in Arrival). He is also shown a copy of The Stars and Stripes (he has been given eyeglasses to correct the chemical farsightedness), the daily distributed to members of the American armed forces not based in the US, dated five years into the future. (Some biographies note that Markstein wrote for this newspaper.) Ah, but that paper cut from the preceding paragraph awakens and Major Pike knows it does not take five years for a paper cut to heal, just as Number 6 in The Schizoid Man knows from the bruise on his nail that his captors attempted to fool him.

Is it possible that Terence Feely and/or George Markstein saw 36 Hours and borrowed from the screenplay written by director George Seaton (renowned for directing Airplane) and Roald Dahl (who wrote Beware of the Dog, the 1944 short story upon which 36 Hours is based)? It feels very close (a near miss in airline lingo) with the emphasis on hair dye and whiskers; the Nazis referring to Major Pike as “the prisoner”; the setting; and the plot suddenly turning as a result of a minor household accident. On top of this, while The Schizoid Man and 36 Hours share a plot about trying to derive secrets from a captive secret agent, the Allied invasion of the movie turns out to be D-Day. George Markstein’s The Cooler is an inside out reading of this where Allied operatives who don’t quite make the cut, but know too much, are sent up to a Scottish cooler (something like the Village, but not nearly so colorful) and kept captive by their own side in order to protect D-Day from their own loose lips.

George Markstein was a mysterious man. He puzzled people with his different accents and liquid nationality; he seemed to live a glamorous life. Although he died in 1987 a book, Einstein’s Daughter: The Search for Lieserl, published in 1999,  tried to trace his lineage to Albert Einstein.  This to say, even though there is no published record, for the little we think we know about him, perhaps Markstein was well-positioned to receive first-hand information about fantastic World War Two missions like that of (the fictional) Major Pike. Sadly, we cannot ask him. He is gone; dying far too young at 57 and taking with himself many untold tales of intrigue.

P.S. Should you now want to watch 36 Hours for yourself, there is a little bonus for sharp-eyed spy series mavens: the courtyard of the mansion in 36 Hours should seem familiar to you as it is the same setting that appears in someThe Man from U.N.C.L.E. episodes, it being on the old MGM lot in Los Angeles.

George Markstein and The Prisoner, edited by Roger Goodman, pandqmedia, 2014, is available at Portmeirion and from Amazon.