The UK Antiques Roadshow rolled into Portmeirion under fair skies on Wednesday, May 12 2004. Crews from the Roadshow had been laboring laying down cables, bringing in tables and chairs, and working out logistics since Monday morning. Nearly 30 years old, the Antiques Roadshow is one of the most popular of BBC programs. 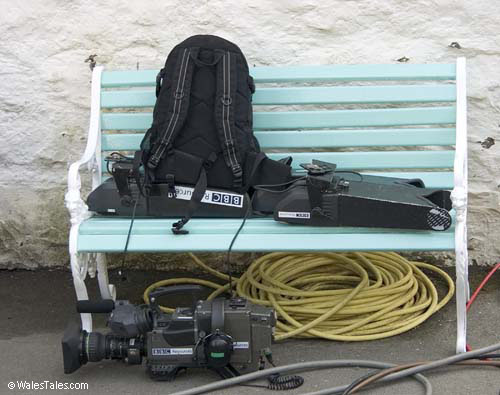 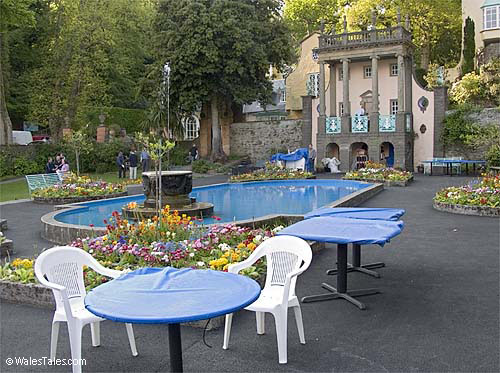 Two thousand antiques enthusiasts were expected during the course of the day for a chance to have their treasures marveled at against the backdrop of the Italianate village of Portmeirion. Fortunately, not everyone showed up at one time, making for a very pleasant day for anyone coming to have his or her antiques appraised, or simply have a day out. Admission was waived for all. 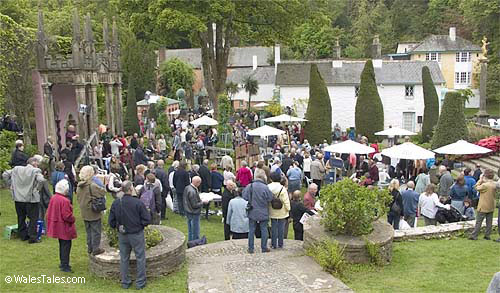 Experts in many fields, including Clocks & Militaria, Ceramics & Glass, Furniture, Books and Silver & Jewellery, were present at umbrella-shaded appraising tables. 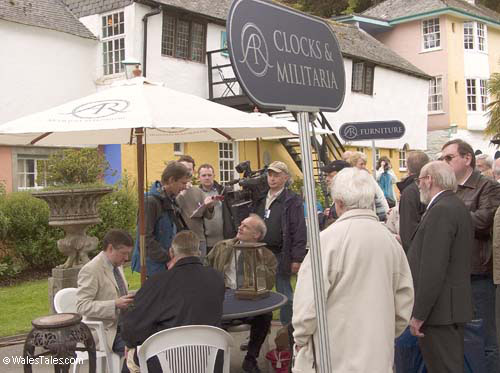 Some of the exhibits people brought from their homes defied categories — such as the dioramas of mounted fish.  The fish, in shades of muted greens and tans, were displayed in glass-fronted cases that looked like large television sets. The inside back of each display box was painted to look like an underwater scene. 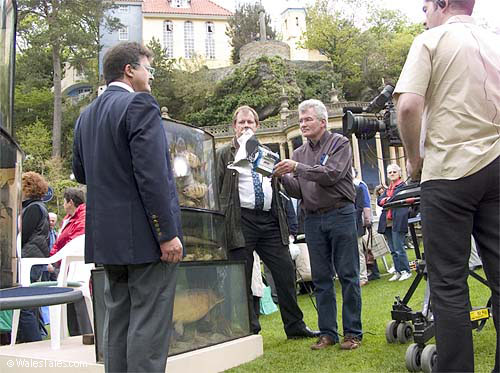 The trouble with being at an Antiques Roadshow taping is that it is nearly impossible to hear what is going on during an appraisal. The people wear mikes and use their indoor voices, even when they are outdoors — as they were in Portmeirion where birdsong is king. So, if you wish to know the value of the fish, you will have to tune in to the Roadshow when this episode is broadcast in several months. The fish taping was over, a senior citizen happened by for a closer look at the exhibit and spotted a long-dead, large eel. “Oh, oh!” she exclaimed to no one in particular, “I think I’m going to faint, it looks just like a snake!” Should she have swooned, the Red Cross was on hand, with some very cheerful folks on duty. Also, the North Wales police were represented at the crime reducing zone. They gave your reporter an invisible ink pen to mark her valuables. 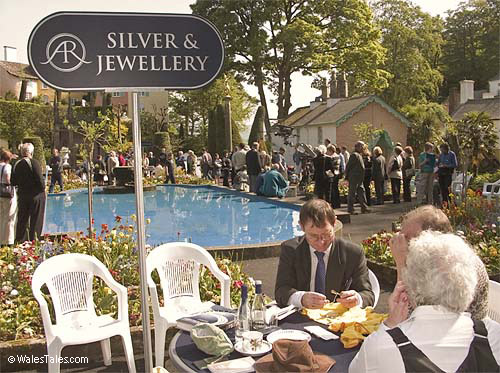 Treasures that appeared at the Roadshow taping included a miniature Welsh dresser made of Ffestiniog blue slate that was notable enough to attract the time and attention of both appraiser Paul “Andy Pandy” Atterbury and Antiques Roadshow host Michael Aspel. Dressers like this were typically made by a slate carver to demonstrate his skills. Other decorative slate objects found in Wales include miniature tools or delicate-looking fans. The dresser may have been toy-sized, but, so dense and sturdily built at about seven-inches-wide, it caused Aspel who was hefting it to exclaim, “It’s so heavy, it’s giving me a hernia!” This appraisal could be heard clearly above the birdsong. The segment producer liked the comment so much, he had it repeated one more time with feeling for the camera. 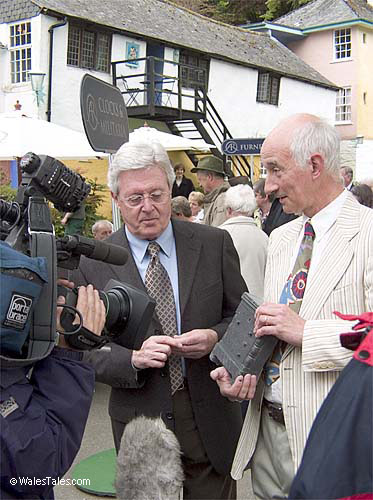 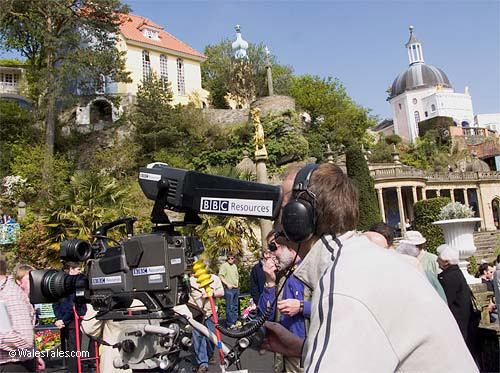 Other exhibits included a Yardley’s English Lavender figure group, which was from the present owner’s father’s chemist shop in London; paintings of sailing ships; an oil of Harlech Castle; a tea set that expert Eric Knowles said caused a lot of ladies in the last century to have scalded knees (the cup ears were solid, so not easy to hold); and a group of acoustic guitars. 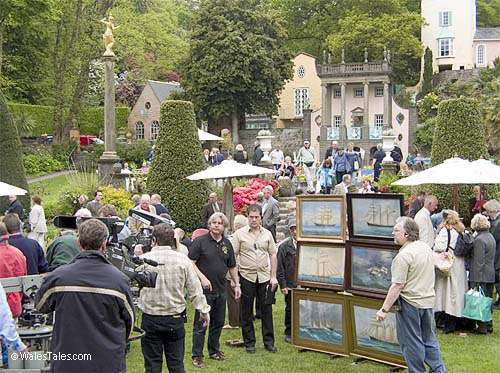 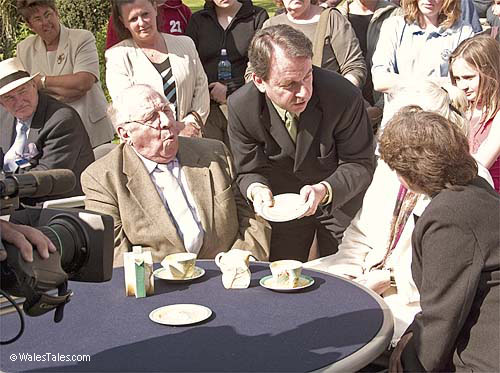 When musician Paul Brett, who hails from the Lleyn Peninsula, was asked what he looks for in a guitar the black-clad Johnny Cash/Willie Nelson-styles collector replied, "The sound." 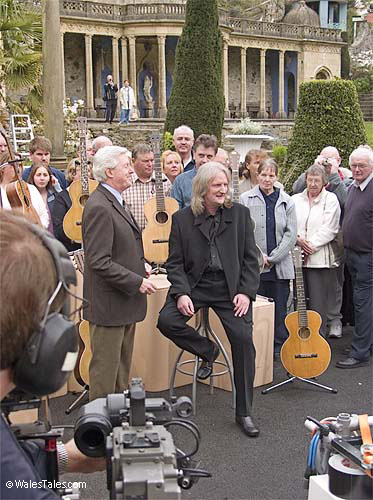 The Antiques Roadshow in Portmeirion is scheduled to be aired in the UK in January. Its scheduling in the US is anyone’s guess. An Antiques Roadshow staffer said that it typically takes around 18 months for a UK aired episode to make it across the Pond. 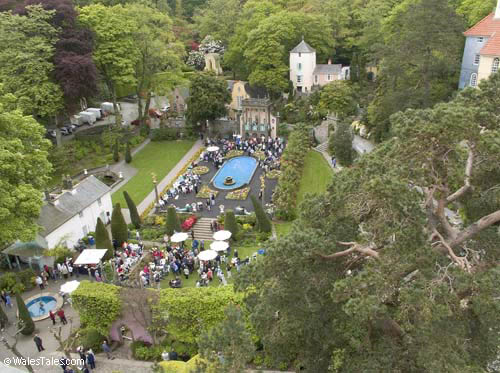