The actress Fenella Fielding is strongly identified with her part in the television series The Prisoner in which she played the whole of her memorable role off camera. Fielding was the “village voice” making Butlin’s-style announcements (“Good morning, good morning, good morning, and what a fine day it is!”) to the inhabitants of Patrick McGoohan’s bizarre fable. Her voice was cheery yet somehow ominous “syrupy with a backbone of iron,” as she puts it. At a London studio to record her village announcements in 1966, the instruction she received from director McGoohan was that she “not be too sexy.” “I think he meant don’t do it with any innuendo – as if I would,” she says, with a wink in her voice. In person, Fielding speaks in an elegant rumble; a few phrases every now and then escape in the exact timbre of her “village voice”. Her celebrated work on The Prisoner was completed in less time than it took to travel to the studio.

Fielding had not been to Portmeirion, the location of “the village” in The Prisoner, before her visit in May to dedicate a plaque commemorating that television show. She arrived, a petite figure, with jaw-length brunette hair and green eyes, sporting a youthful and stylish blue denim jacket worn with a white blouse; a yellow flower pinned at the throat. As she walked into Portmeirion’s sunny Battery Square the capacity crowd parted for her passage and flowed together again. She was welcomed by Robin Llywelyn, Portmeirion’s managing director, who spoke in Welsh and English noting that Portmeirion founder Clough Williams-Ellis had a penchant for plaques, several of which, praising beautiful weather, are on the base of the nearby Hercules statue. Locals who had served as extras in The Prisoner were in attendance. Fielding thanked the people for coming and drew back a little curtain unveiling the dinner plate-sized, green and grey, etched zinc disk. Designed by Fred “plaque man” O’Brien, it is affixed over the French doors of Portmeirion’s Prisoner Shop: a part of a series of such installations around North Wales that will form a television and movie trail identifying on-location entertainment filming spots. The project belongs to the Wales Screen Commission – North, which will produce a map of the completed trail shortly.

Fielding had been to Wales before, acting in Aberystwyth at the university’s theatre, Swansea and Cardiff. In Cardiff she “recorded a lovely, charming voice to Mother Deer the children’s television cartoon show. It was a deer who was a mother. I can’t remember what my character was called.” On a day off while on tour she visited the Andrew Logan Museum of Sculpture in Berriew, Powys. Logan, a renowned artist with a list of celebrity patrons, including the Queen, is a friend of Fielding’s. She calls Wales “heavenly” and “a wonderful place”.

Fenella Fielding first worked with Patrick McGoohan in television’s Dangerman. She already had a reputation for playing quite sexy and Dangerman saw her as a diamond garter-flashing casino hostess in the episode An Affair of State. Never before or since was so much thigh revealed in that programme.

About landing her role in The Prisoner she says, “I had just made a huge sort of breakthrough in the theatre. And practically everything I did came from that. It was a musical by Sandy Wilson, whom I’m sure you’ve heard of. He wrote The Boyfriend. He wrote a musical called Valmouth from a novel [written in 1918] by Ronald Firbank, who is a most extraordinary, unusual, sort of surreal writer. The show itself had a huge cult success. It was a wonderful part I had [Lady Parvula de Panzoust], and I broke absolutely through in that. I had two fantastic solo songs and one trio.”

And so, was she McGoohan’s first choice for “village voice”?

“Well, as far as I know,” she says, on the telephone from London. “You never know about things like that. But I seem to recall I was the voice of the moment at that time. I imagine that they just automatically got in touch with me. I certainly didn’t have to audition. I can tell you that in our profession if you were working, then you seemed to be working a lot. If you’re in something, then you’re in lots of other things as well. I think that’s the sheer practical answer to that.”

Fielding had only seen “one, at most two” episodes of The Prisoner. In 1967 before VCRs if you weren’t home when a program was shown on television, you missed it. For Fielding to have seen The Prisoner on television would have meant staying home in the evenings. This was not something a busy actress was likely to be doing. She is constantly reminded of the show, however, by the fan mail she receives. Not bad for a role that didn’t receive screen credit: “I’ve had fan mail for years ever since The Prisoner was on for that voice and many invitations to come down to Portmeirion and take part in conferences, dinners, celebrations and all that. And this is the first time I ever accepted.”

Among her other memorable roles are her characters in the 1960s’ Doctor films; The Vixen, villainess of four series of Uncle Jack; and Valeria in Carry On Screaming, which is the role that made her an iconic figure in the UK. And what is Fielding working on currently?

“Wishbaby. All one word. It’s an object – it’s a kind of doll that the person who uses it makes. It’s the size of a baby. The character I play in the film was taught by her governess how to make one of these and how to make her dreams come true through making wishes through Wishbaby.”

This independent film of the supernatural stars Fielding as a bag-lady named Eve who rewards a young woman who saves Eve’s life with a way to change her own life: through the wishbaby. The film is directed by Stephen Parsons, who also wrote the script.

And so the Scorpio-born (November 17) Fielding likes these mysterious, spooky roles? “Oh, yes,” she purrs darkly.

Fielding also did a recording earlier this year from the works of Colette, which is going to be released on CD. She had played the eponymous Colette Off-Off Broadway, in New York City, in the early 1970s, taking over from Zoe Caldwell:

“That play was at the Ellen Stewart theatre, which I believe was in a very rough part of New York. I remember that it was very near where people go to get their dole. People used to come to the theatre in specially arranged coaches. When we were rehearsing, this is fascinating, we were always told to dress terribly well otherwise taxis wouldn’t stop for us.”

Final word, now that she’s seen Portmeirion in person what does Fenella Fielding think of it?

“Oh, it’s ravishing! Just beautiful. And thank you for those lovely books [the author had given Ms. Fielding a copy of Cambria magazine and a copy of On The Trail Of The Prisoner: A Walking Guide To Portmeirion’s Prisoner Sites]. In my mind I was thinking, ‘it can’t have been as lovely as that’, and then these photographs show it was just fantastic.”

Village Voice Fenella Fielding at The Prisoner's home away from home.

A plaque honoring The Prisoner — the famous television series that first aired in the UK in 1967 and in the US in 1968 — was unveiled in Portmeirion on Friday, May 13th, 2005, by the actress Fenella Fielding. 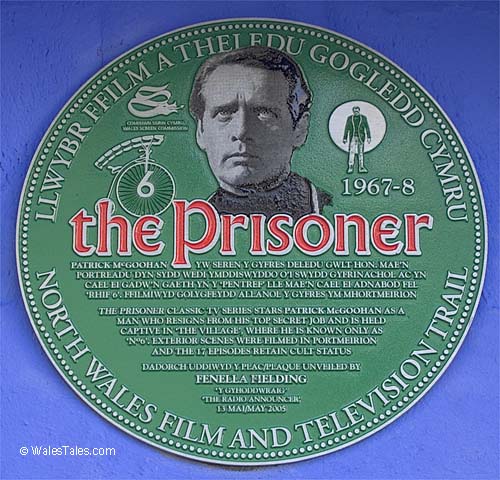 The Prisoner Shop's new plaque, made by
Fred "the plaque man" O'Brien

The plaque has been mounted on the façade of the Prisoner Shop, also known as Number Six's cottage. It has not been attached to the actual listed building's wall, but to a section that is not a part of the building's original design above the front door. 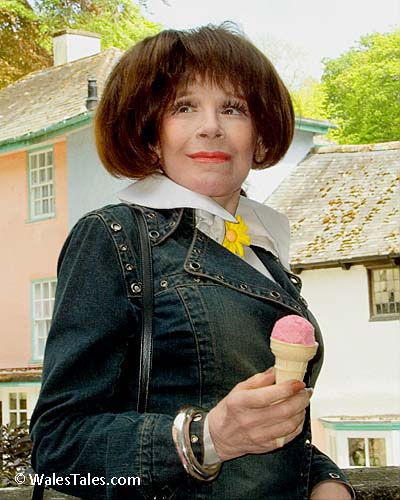 The Flavour of the Day is Strawberry..