Just where did the putto, also referred to as a cherub, in the crevice behind the Bristol Colonnade come from? With the decorative scrollwork reminiscent of the kind found on some ships’ fanciful figureheads covering his lower half, and his chubby right arm raised in hail, the little guy might well have sailed the seas. So, was he ever a sailor? Maybe. And it’s likely he was the sole survivor of the Amis Réunis.

Following the wild winter of 2011- 2012 the heavily flowing Afon Dwyryd scrapped away enough of Traeth Bach in front of the Hotel Portmeirion to reveal the skeletal remains of Clough Williams-Ellis’ old Portmadoc trading ketch, the Amis Réunis. 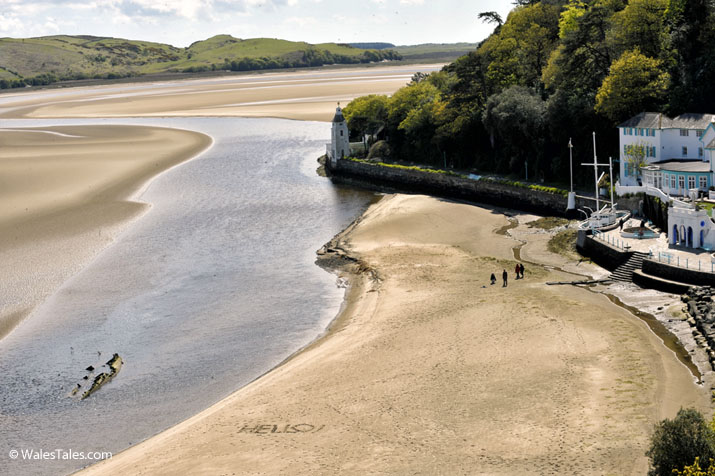 Since the photo below of the Amis Réunis is dated 1929, the little ship was purchased in the same decade Clough began building Portmeirion. Moored next to the Hotel, the Amis Réunis had running water and electricity, so she served nicely as quarters for family or guests.

Unfortunately, one day, just after maintenance had been carried out, a sudden gale sprang up and conveyed her out toward Ynys Gifftan, plopping her on her side and allowing sand to fill her up. Clough tried to float his ketch back using barrels and lots of man power. But failing this, he rescued what he could and built what is today known as the Stone Boat. This information and more appears in Clough book Portmeirion The Place and its Meaning. 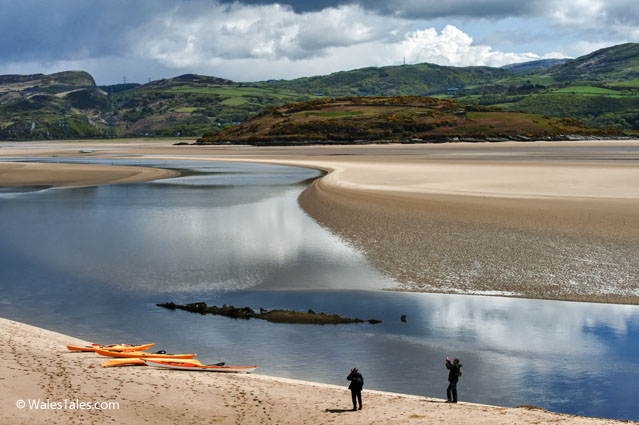 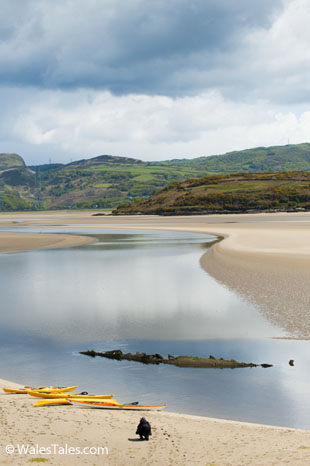 Fast forward to the spring of 2012, Afon Dwyryd drove relentlessly seaward hauling away tons of sand daily and making entry into the water perilous at best. The same mighty force that uncovered the Amis Réunis made it impossible to get anywhere near her. Although relatively close to shore, the wreck was still far enough away, and set deep enough in the swift water, to make up-close inspection not anything anyone with a grain of sense would want to undertake, even in scuba gear.

Oddly, after that observation on a May afternoon, it was surprising to see a couple of men in wetsuits, carrying snorkeling gear, descending the staircase inside the Hotel. This was so surreal as to be a vision. Where were they going? Were they going to visit the wreak? Suffice to say we never saw them again. However, when we asked, no one else had seen them in the Hotel in the first place. Do you believe in ghosts? Later, kyakers came to explore.

Unfortunately, the half-sunken Amis Réunis -- despite making a good appearance, demonstrating the hardy qualities of the material (teak?) of which she was built -- was still too weighed down with sand to be rescued. And the Estuary once again reclaimed her. 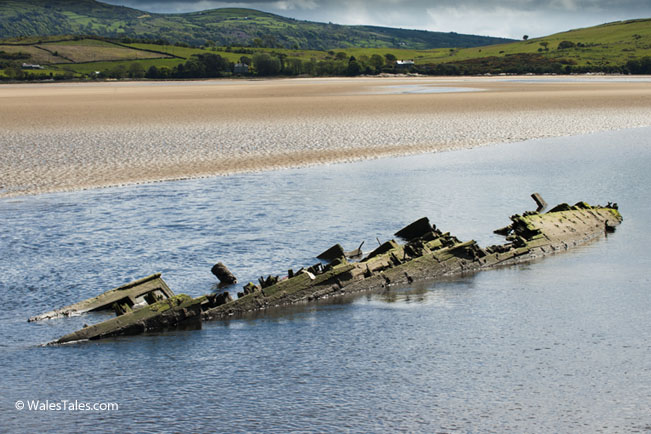 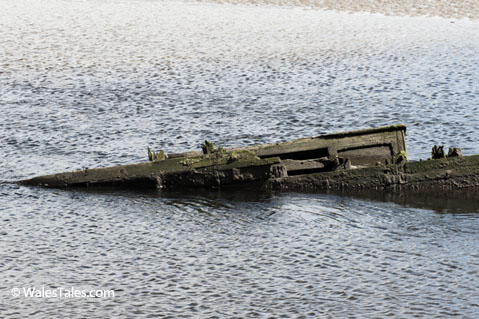 When asked about the cherub-like figures, as seen in picture, perched over the stern of the original Amis Réunis, Robin Llywelyn, Clough’s grandson, said, “I had never thought about it before, but now that you mention the cherubs, it seems fairly certain that the little cherub in a rock niche below Chantry is one and the same as one of the pair that were on the boat, or a copy. The right hand cherub must have got lost or swept away in the shipwreck. Anyway, that gives a little bit of history to the rock niche cherub for what it’s worth!” 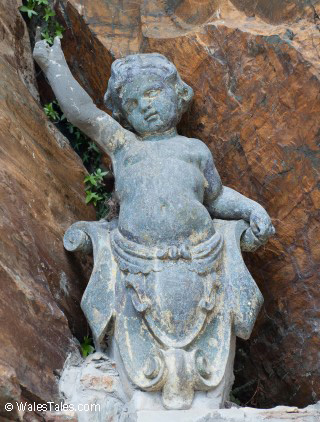